John Gatski of Everything Audio Network reviewed the MRX 700 and although the nice "Stellar Sound!" award might give it away, this is what he had to say...

The Setup
"The setup and operation of the MRX is easy. I do a lot of receiver reviews, and this Anthem ranks up there as being one of the easiest to setup. The GUI, as transmitted to the monitor, is easy to read and follow, including the ARC room correction analysis. It took me all of 15 minutes to be up and running."

"Having previously used the ARC DSP-setup software, I let it do its auto measurement magic and setup using the included mic and software run on the Windows side of my Macbook Pro. The ARC is one of the few receiver auto-setup, audio software packages that accurately sees how flat my room is, especially in the bass, and applies its EQ compensation sparingly. After the ARC setup, I confirmed the channel levels with my Audio Control 3050 RTA/SPL monitor and calibrated test microphone. It revealed that the ARC did a fine job analyzing my room because there was very little EQ applied. I have tweaked and treated this listening room over its nearly 20 years of use to where it sounds really good and does not need much electronic compensation."

The Audition - Theater
"The MRX delivered impressive results... with a deep and wide soundstage, localized and detailed effects panning, and abundant use of the LFE channel... Through all the sonic intensity, I noted a welcome smoothness in the Anthem's audio delivery that belied how loud the SPL meter indicated - which is just what you want out of a serious home theater receiver.

The Audio - Music
"The MRX delivered audiophile-like details from this well recorded early 1970s gem. The studio reverb effect really pops out via the high-res playback... Audiophiles who like using receivers, will appreciate the Anthem's sonic finesse."

Complaints? ... No
"I had no complaints with the MRX 700. No glitches or software bugs... I set up another set of stereo speakers in another room to provide more music coverage throughout my house. No problems there either. It could easily drive the two extra speakers to massively loud levels.

The Verdict
"The well priced Anthem MRX 700 is a high-performance multichannel receiver with enough features to satisfy audio/video purists and the gizmo zealots as well. For my use, its A/V performance and ease of use is the key to my top rating, and it receives (no pun intended) an Everything Audio Network Stellar Sound Award!"


Click here! to read the full Everything Audio review.
Click here! for more information on the MRX 700.
Posted by Paradigm Electronics at 12:57 PM No comments: 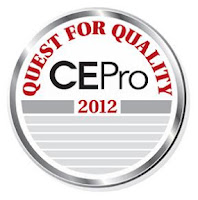 CE Pro readers have voted, the results for the 2012 "Quest for Quality" awards are out and Paradigm & Anthem are honored to accept the silver award for 'Sales & Marketing Assistance'!

The Quest for Quality Awards are unique because they recognize services, not products like most industry awards. Companies are nominated by thousands of CE Pro readers, so we couldn't be more flattered!

A special thank you is owed to each of the employees on the Paradigm & Anthem Sales and Marketing teams. Unfortunately, it is impossible to get everyone in one place, but we did manage to pin down some of the members of each team to say thank you (see below). To all who are not pictured and are out in the field supporting our brands on a day-to-day basis, please give yourselves a huge pat on the back for your passion, enthusiasm and helping hands!

Click here! for more on the CE Pro "Quest for Quality" Awards.
Posted by Paradigm Electronics at 10:52 AM No comments: