A huge thanks to everyone who visited us at CEDIA 2017, where we unveiled the new STR Preamplifier and Power Amplifier!

Both feature a fresh industrial design and premium audio circuit components. The entire series is proudly designed, engineered, and Crafted in Canada.

Stay tuned for further information on our website about both! 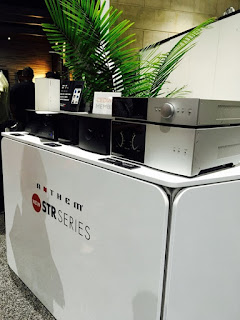 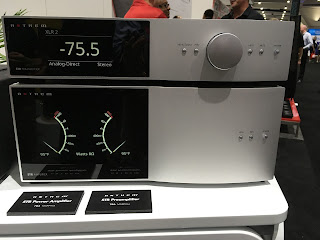 Posted by Unknown at 1:51 PM No comments: 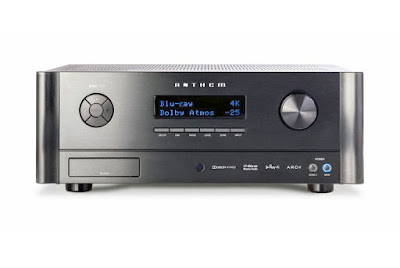 Posted by Unknown at 1:07 PM No comments:

Anthem gear was proudly on display at the recent High End Munich 2017. The MRX series, AVM 60 and M1 were displayed, and the new STR Integrated Amplifier was on demo, along with the Paradigm Persona 7Fs and Paradigm Persona SUB.

Thanks to all who visited us at the show! 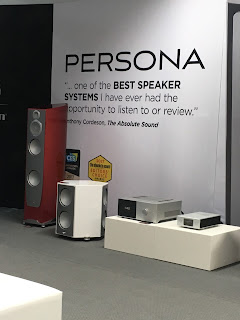 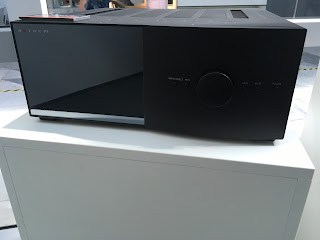 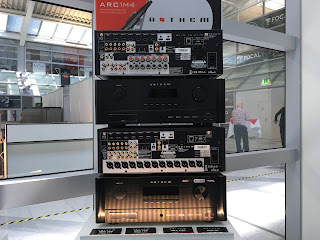 Posted by Unknown at 1:52 PM No comments:

"Now we're back into 2-channel, and this is our best effort yet."

Get a sneak peek at Anthem's upcoming STR Integrated Amplifier! Click here! to watch the video

"Although brands, such as Yamaha, Denon, and Onkyo are the most well-known makers of home theater receivers, there are other brands that cater to a more narrow high-end consumer base.
One of those brands is Anthem, which although known for its high-end audio component separates, such as power amplifiers and preamps, also makes an impressive line of the home theaters, referred to as the MRX-series.
There are three MRX models - 520, 720, and 1120.
All three receivers are HDMI 2.0a, 3D, 4K, HDR, and HDCP 2.2 compliant, and also incorporate 32-bit DACs (Digital-analog-converters) for optimum audio quality from any digital source, and Zone 2 operation capability." - Robert Silva, Lifewire


Click here! to read the full review
Click here! for more details about the MRX Series
Posted by Unknown at 1:04 PM No comments:

Reviewer John Gatski, Everything Audio Network writes, "from my lengthy review tenure, I will tell you that the new MRX-720 (and through extrapolation, the big brother MRX-1120) is a fantastic receiver that combines a significant step up in audio quality..."

"If you combine its upper-echelon receiver sound quality with its ease of use and the plethora of bells and whistles that keep it modern, the MRX-720 is as good a receiver as any at twice the price. I normally don’t do this so early in the review, but my opinion is that the MRX-720 is an award-garnering receiver — and it only costs $2,499."

Click here! to read the full review
Click here! for more details about the MRX 720
Posted by Unknown at 1:01 PM No comments:

"If I had to choose one word to describe the performance of Anthem’s MRX-1120, it would be "cinematic". At the end of the day, this is what good home theatre is all about folks."

"From the get go, it was clear that Anthem’s MRX-1120 was capable of achieving some serious volume levels, so much so that I couldn’t play at my usual volume levels without waking the entire house.
The MRX-1120 created a huge, seamless soundstage that threatened to burst the seams of my small to medium sized home theatre room. The soundstage was seamless, with the MRX-1120 not calling attention to any particular speaker in the room, but rather creating a unified sound-field.
Detail was in abundance. As Chisolm makes his way through an unforgiving desert environment, the harsh winds can be clearly heard whipping around him. While there are plenty of AVR’s out there that are capable of turning in a detailed performance, the MRX-1120 had a way of bringing detail to the fore and giving it a sense of realism. With Chisolm riding into town, the sounds of the townsfolk going about their business and the rings from the smithy’s hammer are all clearly rendered.
The MRX-1120 was also quick to show me who’s in control, putting any doubts I had about its parallel subwoofer inputs to rest. When the mines are blown early in the movie, I was startled as the explosions rattled the otherwise serene countryside; a rarity these days unless I’m watching a James Wan horror movie." 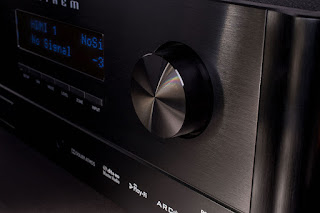 "...Fantastic sound and every feature you could want," Caleb Denison, Digital Trends

"The MRX 1120 features a massive Toroidal power supply, offering 140 watts of clean power across each channel at 8 ohms. Ultra HD pass-through, supports both 4K and high dynamic range (HDR) content, with support for 4:4:4 chroma and BT.2020 colorspace. A up-scaler is even included, bringing standard and high definition signals up to 4K. A total of eight HDMI inputs are included, all of which support HDMI 2.0a and HDCP 2.2, in addition to two HDMI outs and three digital audio outputs." 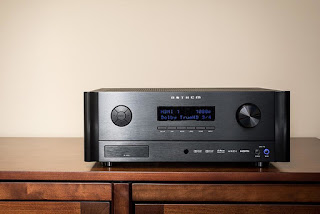 "The Anthem MRX 1120 is a real reference quality receiver that can be the hub of any home theater" - Chris Heinonen, Reference Home Theater

"It makes the right choices in what features you need and leaves out the extra ones you will likely never use. I’m happy to have it powering my updated home theater and believe anyone after a reference quality receiver should look at it." 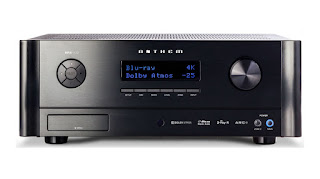 Click here! for more details about the MRX 1120
Posted by Unknown at 12:26 PM No comments: 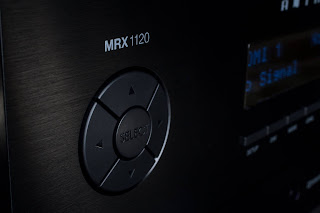 "With eleven channels of amplification, Anthem's flagship MRX 1120 is fit for home cinema owners eager to enjoy the immersive sonics of a 7.2.4 Dolby Amtos or DTS:X speaker array. Yet there's more to this Canadian powerhouse than sheer grunt and convenience. Setup and room correction is handled by Anthem's exemplary ARC processing engine, ensuring a sound performance that's tailored to both speakers and listening environment. The result is home cinema haven, with astonishing imaging, clean, balanced delivery and a tangible, wraparound soundfield. Excellent."

Click here! for more details about the MRX 1120
Posted by Unknown at 12:22 PM No comments: 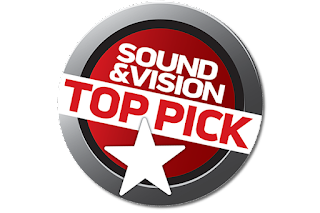 Click here! to read the full announcementClick here! for more details about the AVM 60

"Anthem’s AVM 60 brings long-awaited immersive audio support to those who crave two-channel quality in a multi-channel preamp. Simply put, the AVM 60 is a sweet-sounding sonic powerhouse. Two-channel, multi-channel, or immersive audio are handled with all the finesse, detail, control, and emotion you’d expect in a high end preamp. Pair the AVM 60 with first-rate amplification and you’ll lose yourself over countless nights with any movie or artist you chose." —Theo Nicolakis, Audioholics 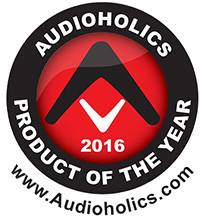 Click here! to read the full reviewClick here! for more details about the AVM 60

"Remember when it seemed that everyone was making home-theater electronics, and there were processors and multichannel amps around every corner? Well, the cost of keeping up with all the latest features and sound codecs proved too much for many manufacturers, especially those who made A/V processors. Anthem made, well, a statement with their original Statement D1 processor, and ever since has been making improvements to their home-theater line. The AVM 60 ($3199) has all the latest goodies, including the most recent version of Anthem Room Correction (ARC). As the perfect centerpiece for a separates-based home theater, the AVM 60 is hard to beat." 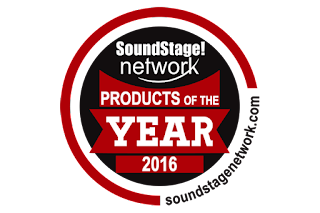 "When I watched Pitch Perfect 2, the MCA 525 allowed me to clearly hear the intricate vocal harmonies in every channel. Not only was there a nice purity in the sounds of the voices emanating from multiple directions, I was also able to hear crowd and audience noise, conversations, and other sounds happening all around me even though some of the voices remained firmly rooted in the front channels. Even with all of these sounds occurring, the soundstage remained layered in the surround channels to provide excellent ambience. In a particularly engaging scene that consists of a riff-off among dueling a cappella ensembles, the beat-boxing of Das Sound Machine and the other groups provided a constant catchy beat that was reproduced especially clearly in the surrounds. There was also some delightful harmonizing by the Tonehangers, and an entertaining cameo by some of the Green Bay Packers performing “Bootylicious.” The MCA 525 let me easily hear the baritone (Josh Sitton) buried deep in the mix as he held down the rhythm, and to track the hulking NFL players as they moved around the stage."

Click here! to read the full review
Click here! for more details about the MCA 525
Posted by Unknown at 8:43 AM No comments:

"Anthem’s AVM 60 brings long-awaited immersive audio support to those who crave two-channel quality in a multi-channel preamp. Simply put, the AVM 60 is a sweet-sounding sonic powerhouse. Two-channel, multi-channel, or immersive audio are handled with all the finesse, detail, control, and emotion you’d expect in a high end preamp. Pair the AVM 60 with first-rate amplification and you’ll lose yourself over countless nights with any movie or artist you chose."

Click here! to read the full review
Click here! for more details about the AVM 60
Posted by Unknown at 8:34 AM No comments:

Find out why reviewer Myron Ho might hold on to his AVM 60!

Myron Ho of Home Theater Review enjoyed the Anthem AVM 60 so much that he's contemplating keeping it as his new reference AV pre-amp!

"As a reviewer, I must admit that it's easy to become a little jaded. Even some of the best components that arrive on my doorstep don't ultimately inspire me to part with my hard-earned money. After all, if I bought everything that I reviewed, I would be very, very poor. But every so often, I find an exceptional item. The AVM 60 is one of those exceptional items. It is as good as some of the finest two-channel music preamps, all the while offering stunning audio and video performance in home theater--along with world-class room correction software and compatibility with all the latest sound and video formats. It just looks so comfortable sitting there on my component rack, I think I'm going to just leave it there permanently as my new reference AV preamp. Be careful auditioning the Anthem AVM 60--you might just have to buy it, like I did."


Click here! to read the full review
Click here! for more details about the AVM 60
Posted by Unknown at 8:25 AM No comments: