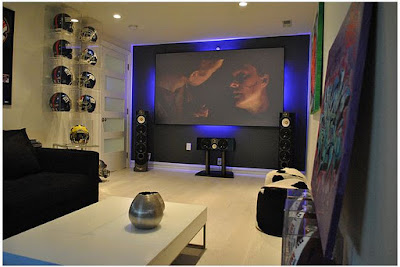 The deadline set by Amani for the install was this year's Superbowl, just in case the Giants didn't make it to the end. Although Amani will be watching his team take on the New England Patriots from the
Lucas Oil Stadium in Indianapolis instead, his man cave is complete and ready for future enjoyment.

A large portion of the install process was auditioning the audio equipment. “For this room, above all else, I wanted a surround-sound system that made me feel like I was right in the middle of the action,” says Toomer. “That’s the one thing I’ve never loved about surround-sound: I’ve never felt like I was actually there. I’ve always felt like I was almost there. I don’t want almost. If I’m watching a game, I want to feel the attack.” 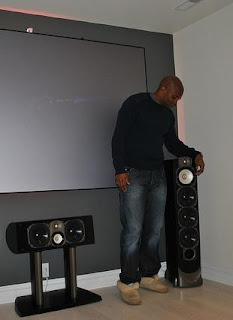 
The end result? A bad a$$ theater room with beautiful decor to match. Amani Toomer’s “Ultimate Man Cave” will air on “First Look” on LXTV, the NY local NBC Channel 4 station at 12:30 AM ET on Sunday, February 5th. It will also air on national television on NBC’s “OPEN HOUSE” program airing at 8:30am on Superbowl Sunday.