"When I was offered Anthem’s MRX 720 for review, I mostly looked forward to using it to listen to Dolby Atmos soundtracks at home. And although I really enjoyed my experience of this surround format, by the end of my listening to the Anthem it seemed mere icing on the cake. What most 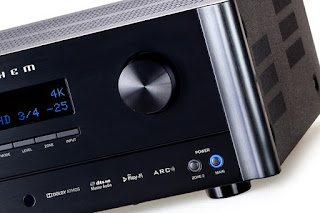 impressed me about the MRX 720 was its state-of-the-art Anthem Room Correction, its clean amplification, and its effortless streaming abilities. If you’re looking for a great-sounding HT receiver that sounds better than other HT receivers while giving up nothing in features, and is simple to use, give Anthem’s MRX 720 an audition. I’m sure you’ll be as impressed as I was."

Click here! to read the full review
Click here! for more details about the MRX 720
Posted by Unknown at 8:02 AM