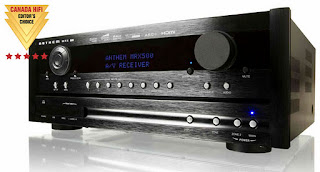 Suave Kajko of CANADA HiFi magazine reviewed the Anthem MRX 500 receiver and had more than just a few good things to say about this new product.  Suave gave it a 5 star rating and without hesitation said...


"The MRX is simply a class act and worthy of being distinguished with the CANADA HiFi Editor's Choice badge."

The most exciting feature highlighted by CANADA HiFi was the Anthem Room Correction (ARC) system that ships with every single A/V receiver, which until the MRX line was released only shipped with Anthem's high-end multi-channel preamp/processors starting at over $6,000!


"I'm tempted to say that this is possibly the best sounding AV receiver I've heard at the sub-$2000 price point yet.... Everything sounded just as I would expect it to in real life."

"Overall, you might be tempted to think that you're listening to higher-end separates rather than an AV receiver - yes, the sound is that good."

Click here! to read the full CANADA HiFi MRX 500 review.
Posted by Paradigm Electronics at 6:34 AM